Lothar Matthäus at the FIFA Museum: An intuitive global career

As part of the cultural programme series "History Makers", Germany world champion and iconic international Lothar Matthäus recalled the greatest moments of his career at the FIFA Museum in front of an audience of more than 100 people. One expression was a recurring theme throughout the entire evening.

Of course, Lothar Matthäus also had to answer the question at the FIFA Museum that he was probably asked most often in his long career: Why hadn't he taken the decisive penalty in the Final of the 1990 FIFA World Cup™? The simple story is the broken shoe that he had to replace in halftime. But the captain of the 1990 World Cup team also provided another justification: intuition! Unlike the penalties before in the tournament, he felt uneasy because his fresh footwear. But he was convinced that his friend and teammate Andreas Brehme would hit the net. So Brehme took the shot and scored.

In general, Matthäus’ intuition ran like a red thread through his unique career, which he looked back on during the live talk at the FIFA Museum. If he was sure of something, he would attempt the feat. If he believed he wouldn’t, he trusted his intuition. Such as the 1990 penalty in Rome.

A transfer of intuitive proportions
Matthäus recalled that his 1984 move to Bayern Munich away from Borussia Mönchengladbach, the club close to his heart since childhood, was an intuitive move. He believed that the move would mean the chance at titles as well as a better standing within the national team. The ambitious Matthäus had not been at all satisfied with having only been substituted in twice in his first World Cup participation, in Spain in 1982. The plan worked. Before moving to Inter Milan in 1988 he won three German championships and one German cup with Bayern - and he went to the 1986 World Cup in Mexico as a starter. 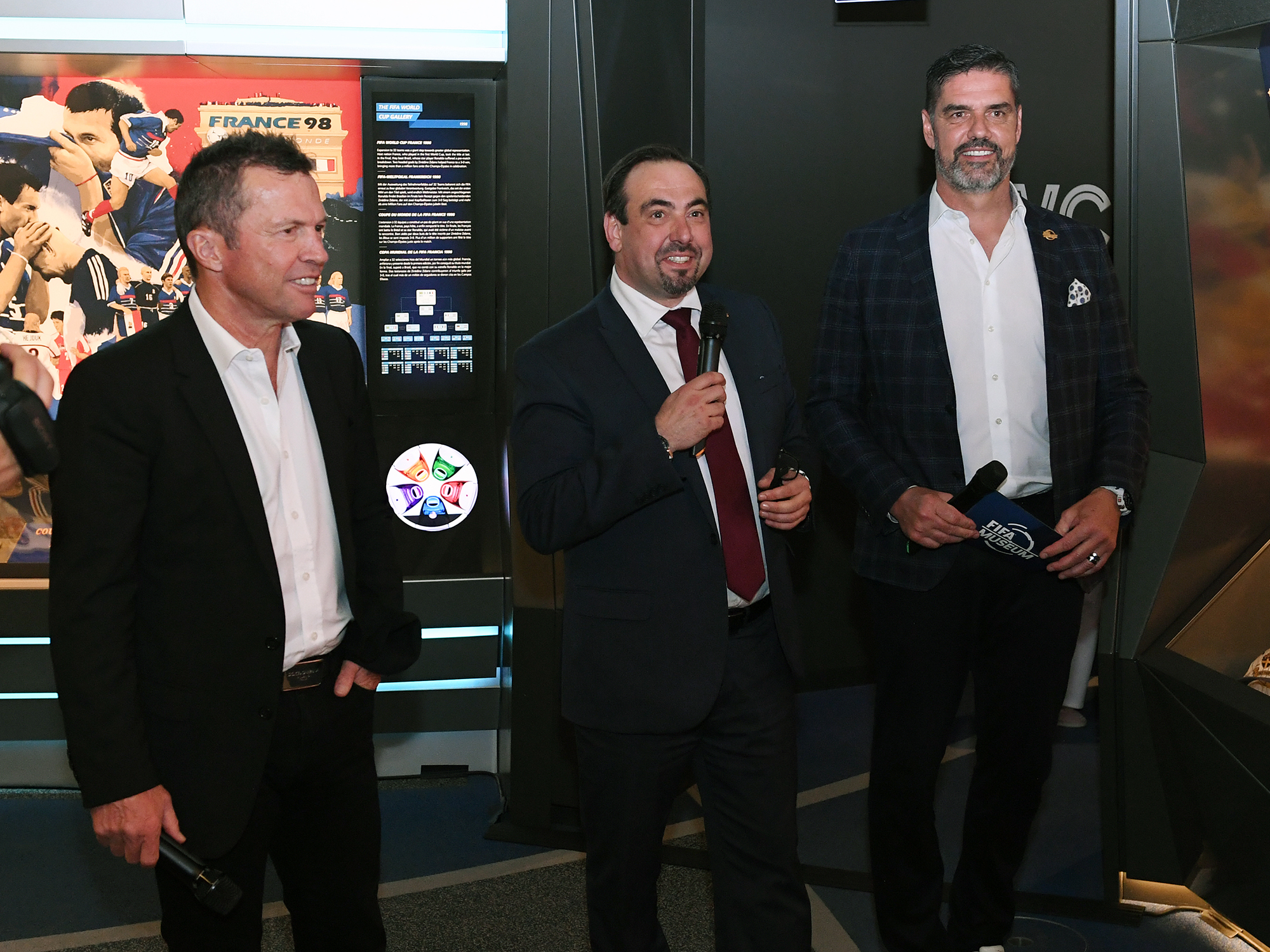 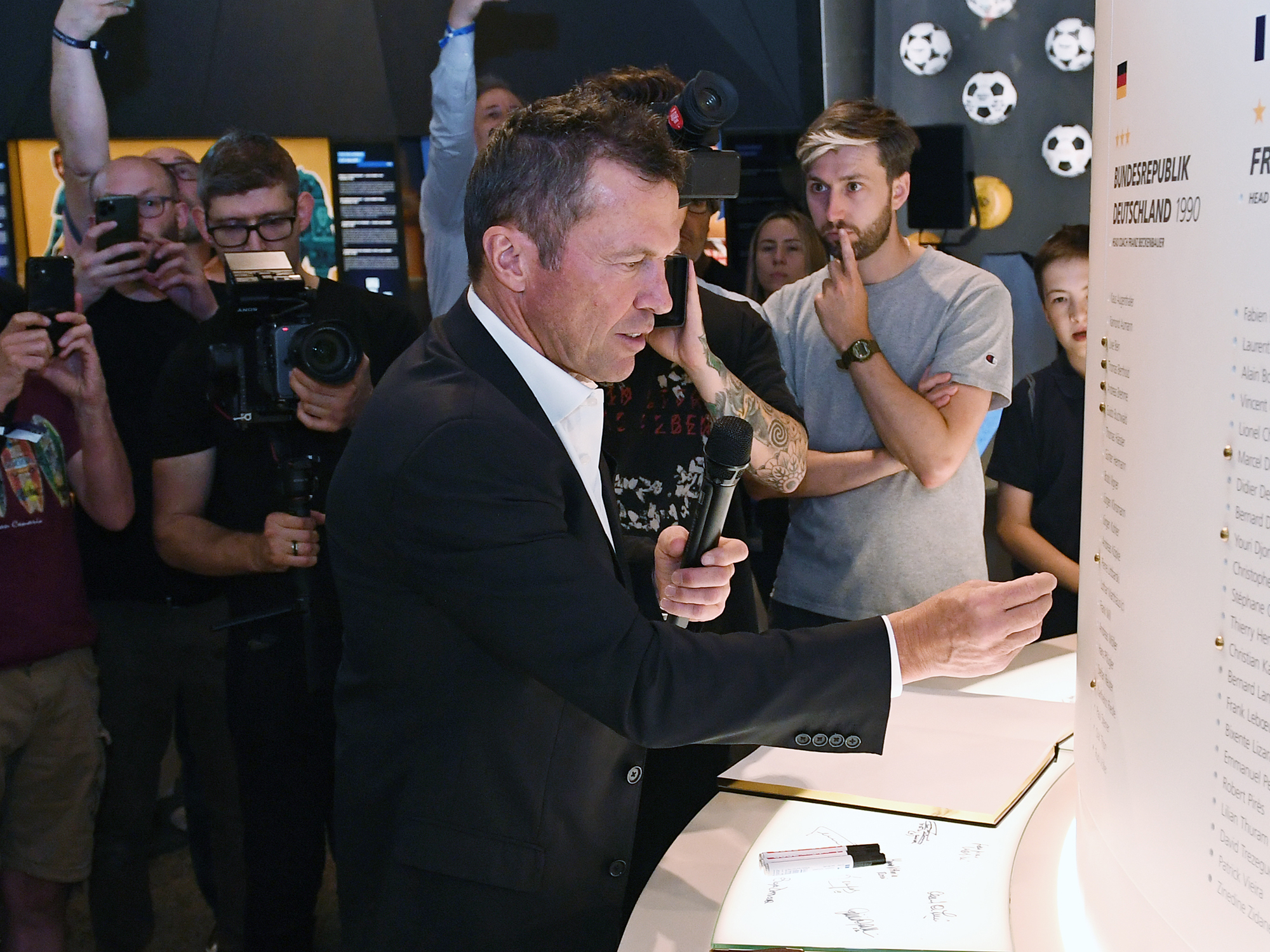 Being World Cup champion, Matthäus of course also put his golden pin into the Wall of Champions... | © FIFA Museum 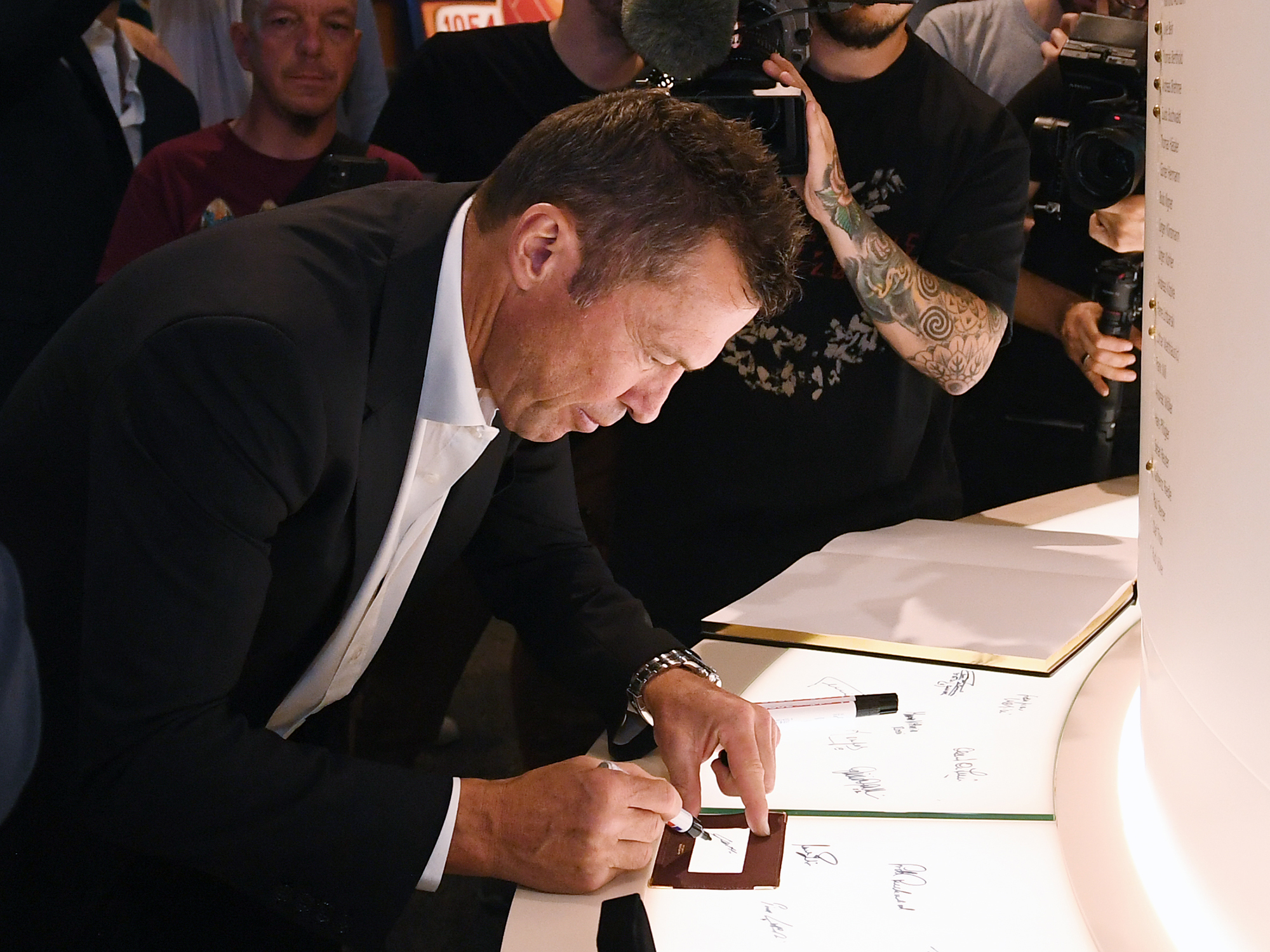 ... and immortalized himself with his signature. | © FIFA Museum 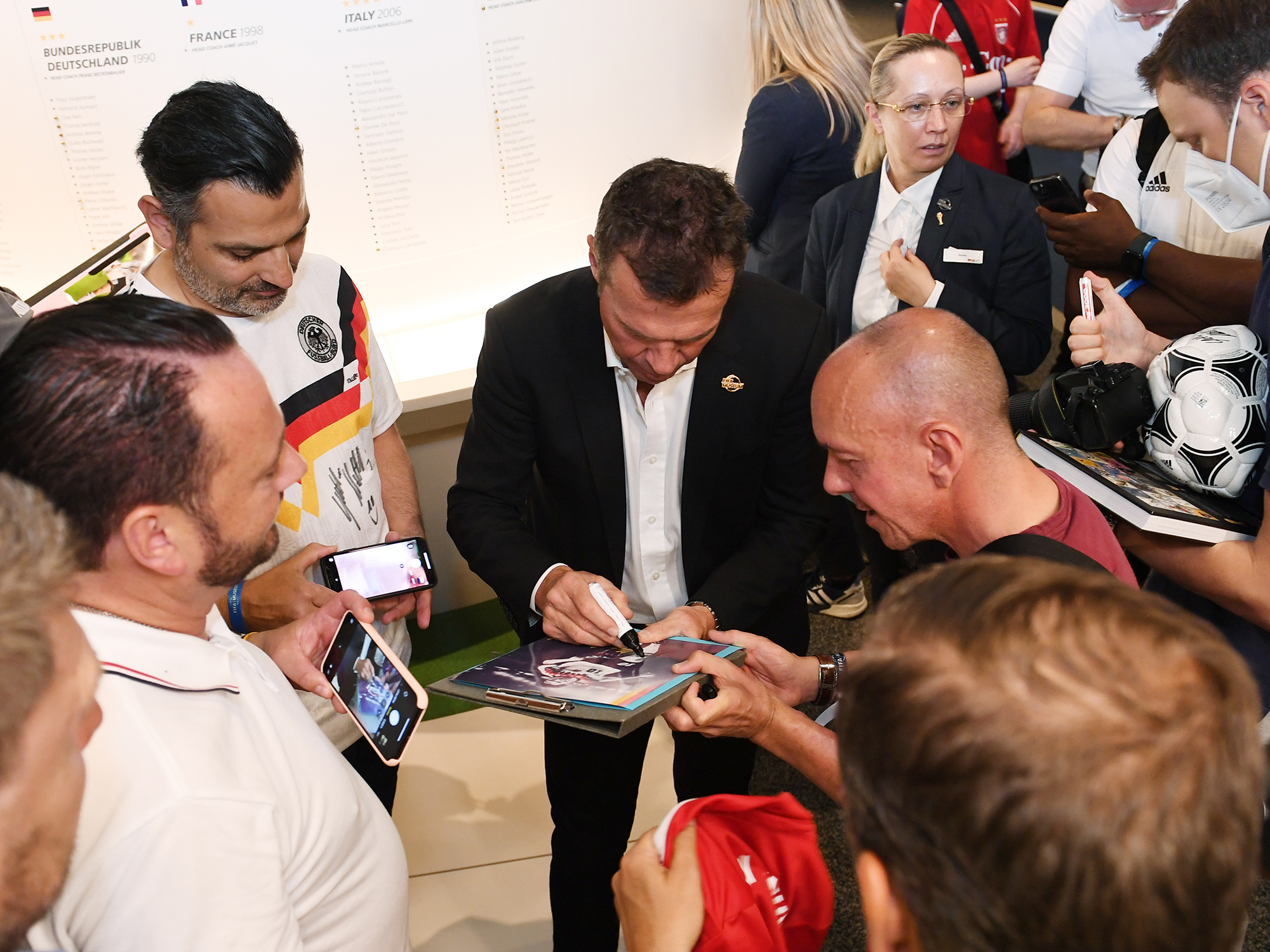 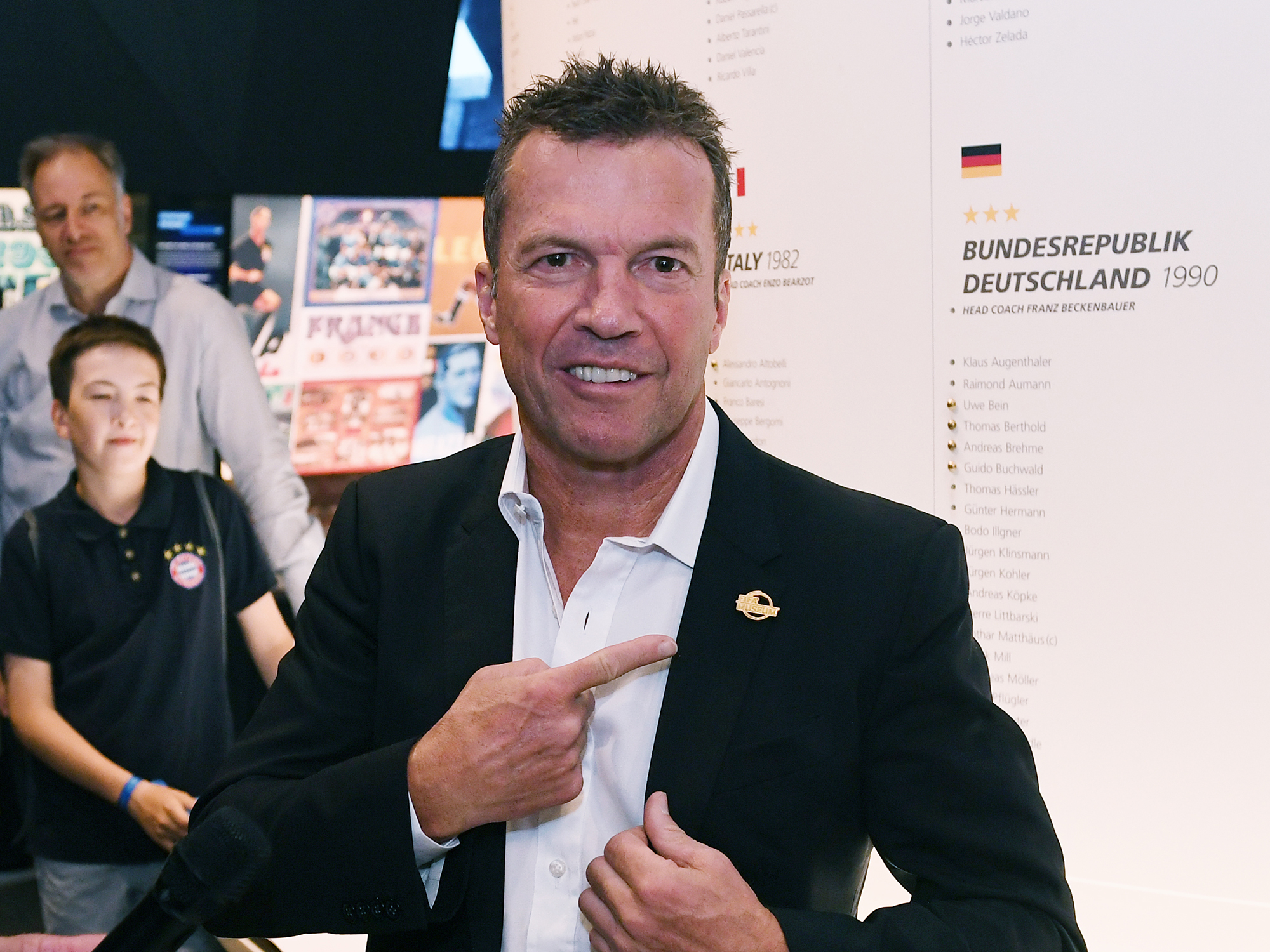 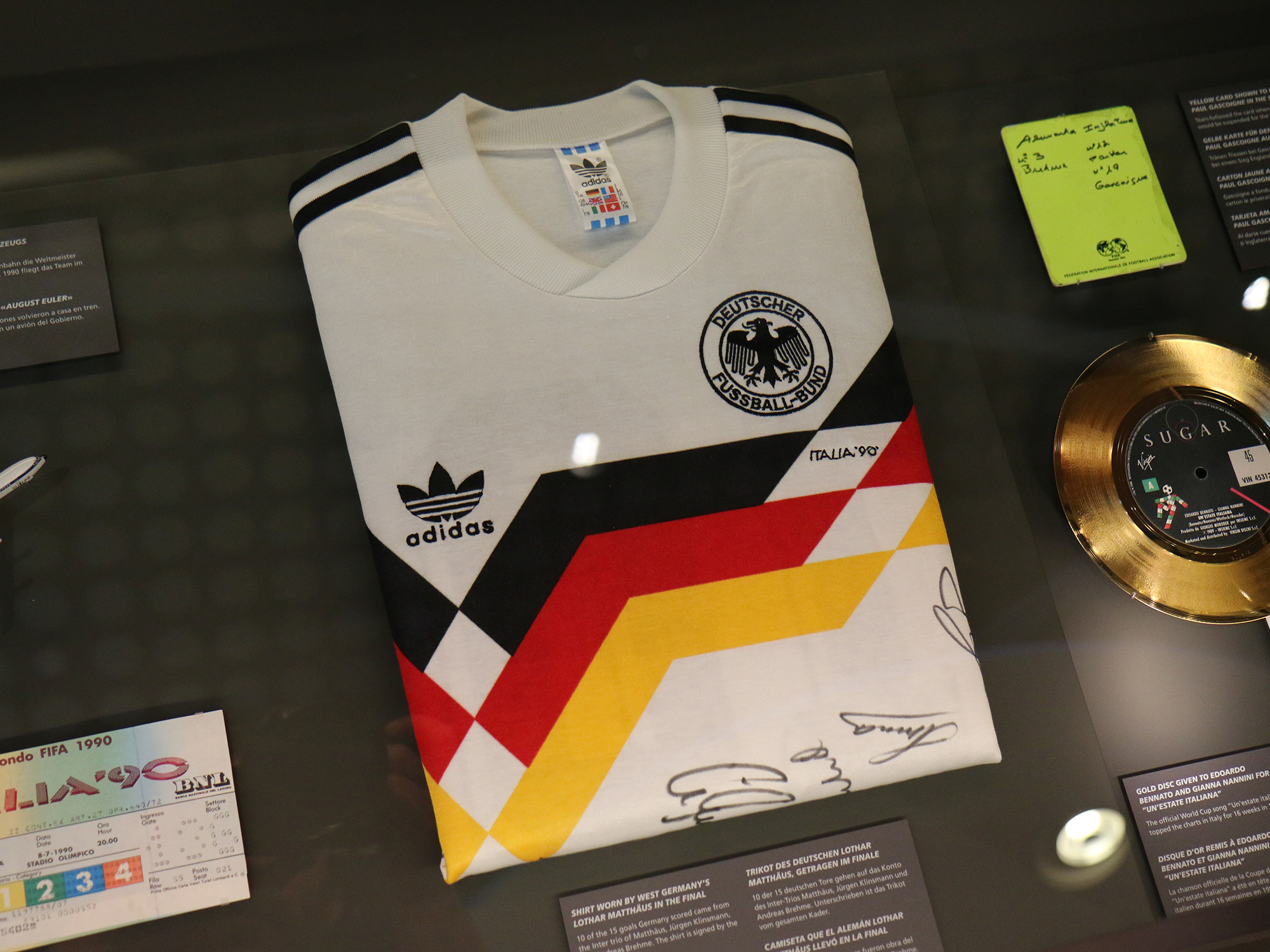 The original shirt of Lothar Matthäus, worn in the final of the FIFA World Cup Italy 1990, with the signatures of the entire team, is on display at the FIFA Museum. | © FIFA Museum 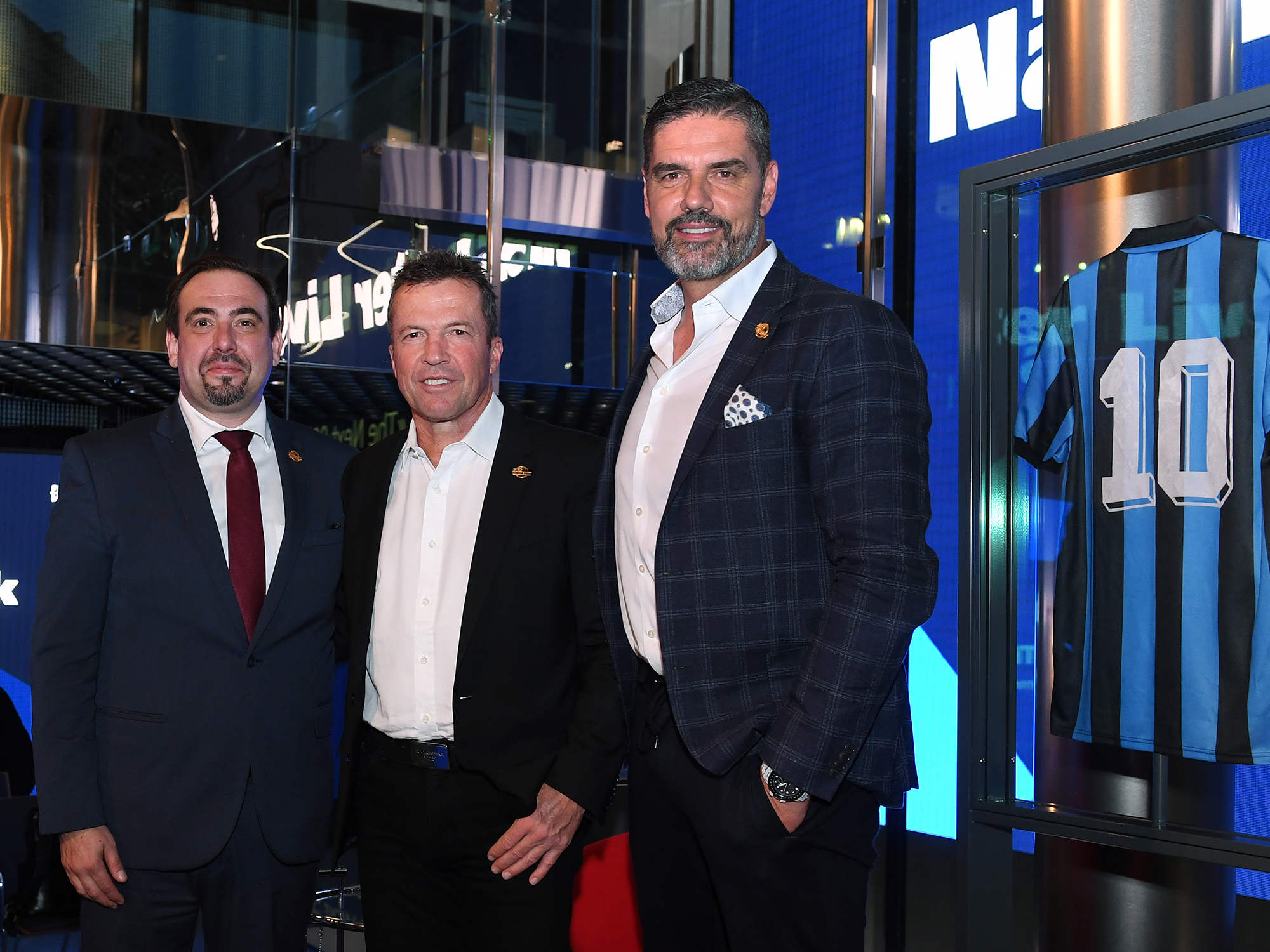 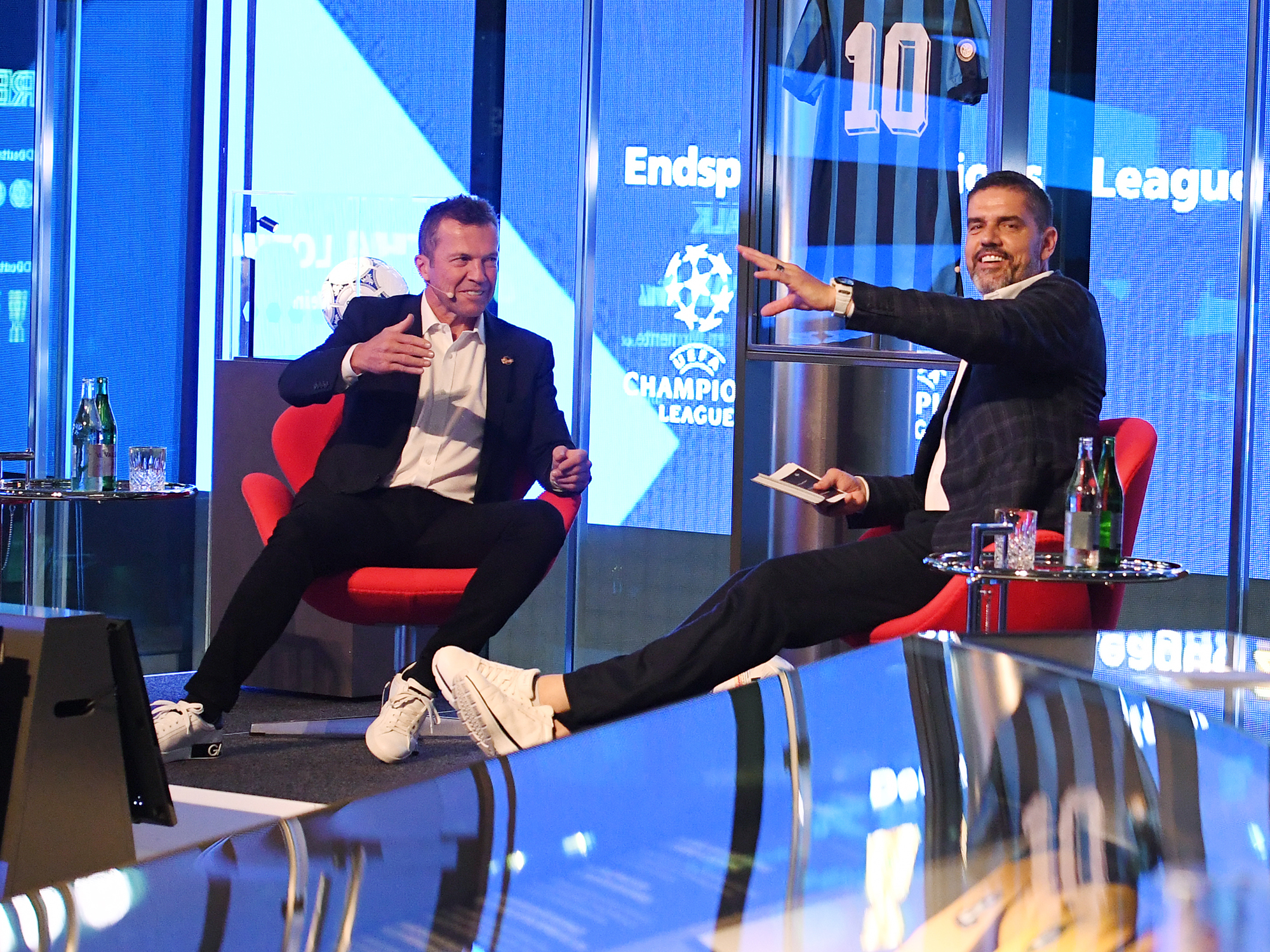 Lothar Matthäus and host Pascal Zuberbühler together on stage at the FIFA Museum. | © FIFA Museum 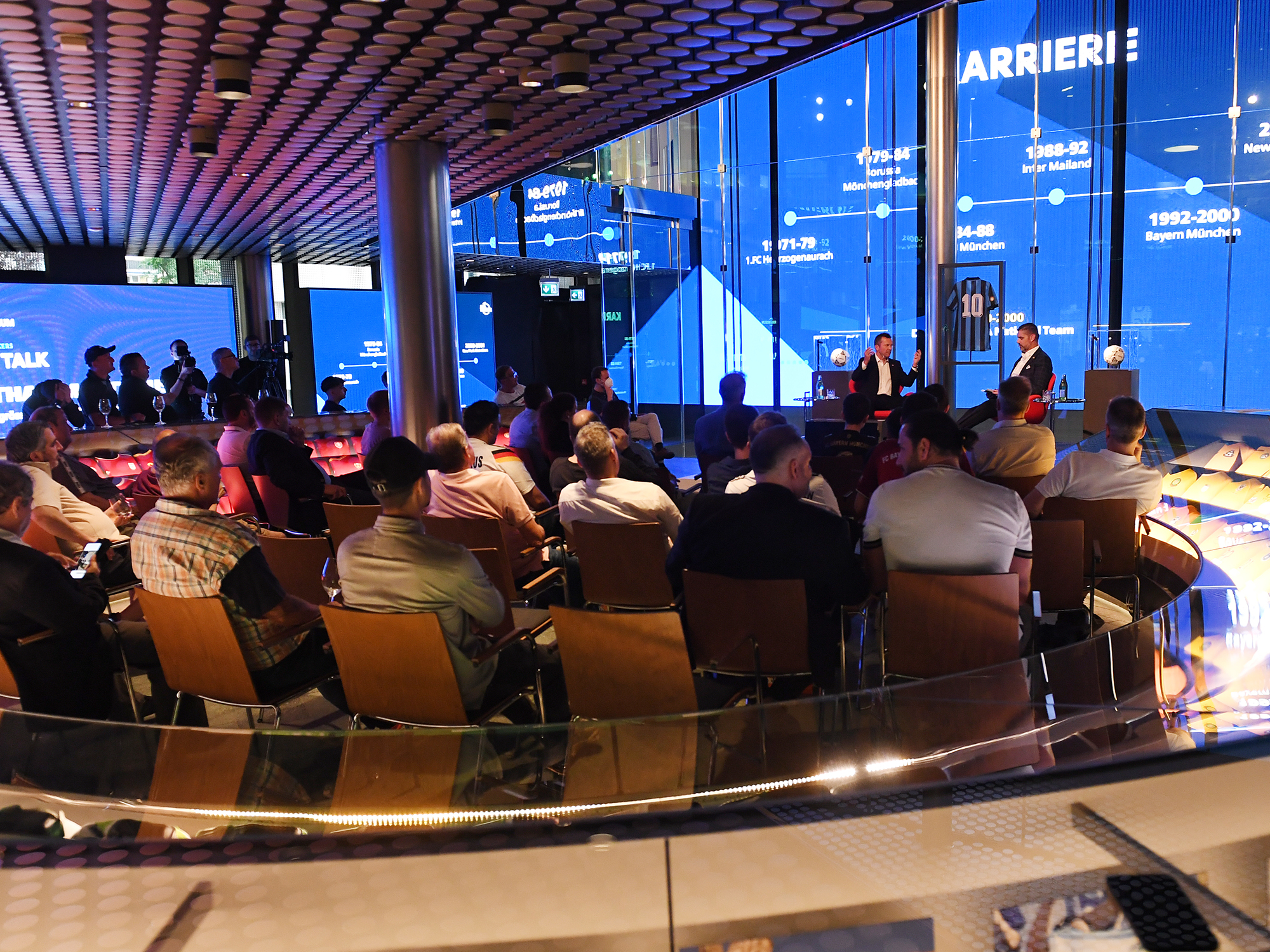 The audience listened with interest to the memories of the World Cup champion. | © FIFA Museum 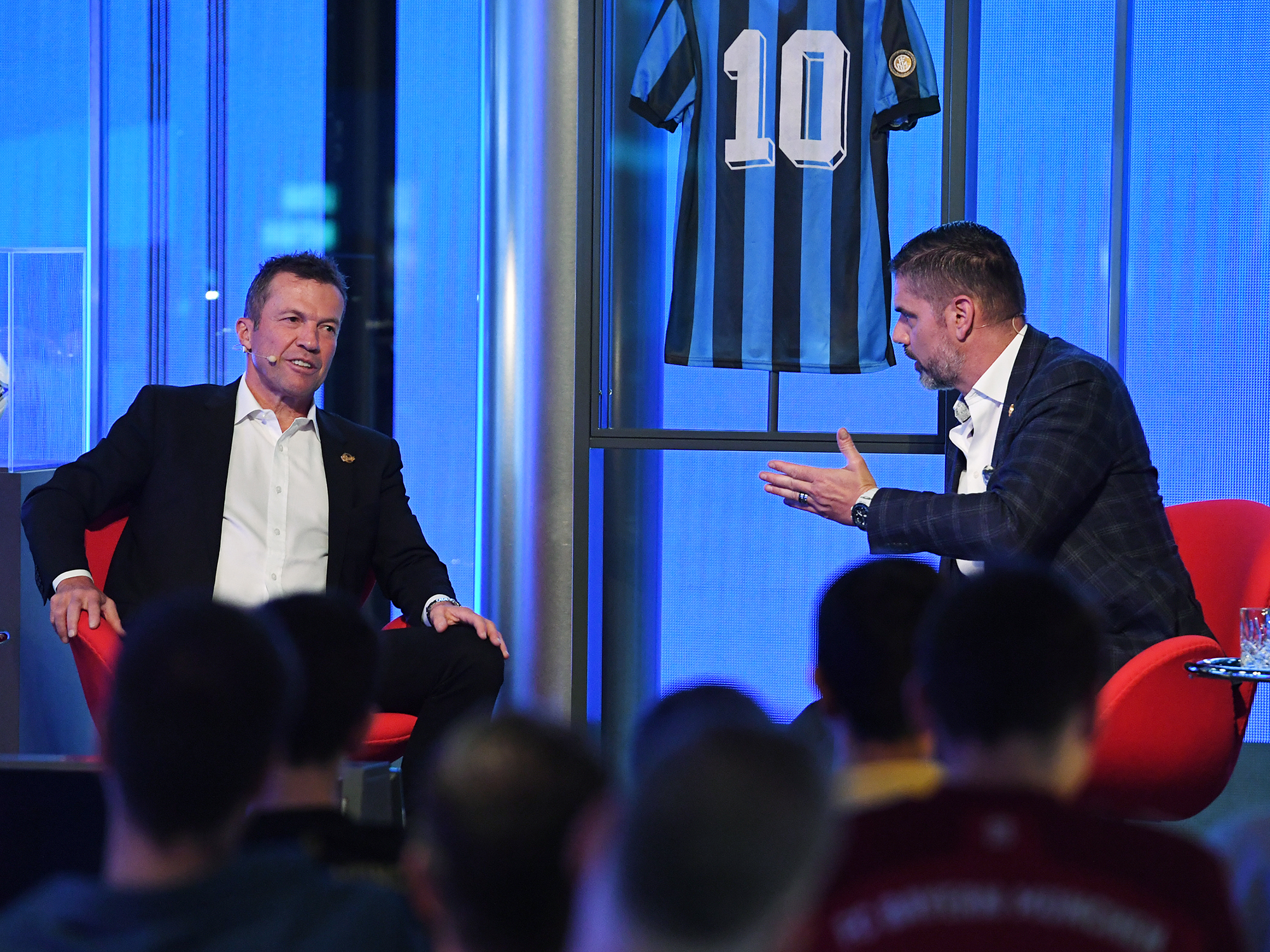 The stage featured an original jersey of Lothar Matthäus from his time at Inter Milan from the collection of the FIFA Museum. | © FIFA Museum

"I didn't want to be a water carrier for Maradona"
During the tour of the FIFA World Cup Gallery before the live talk, Matthäus, together with museum director Marco Fazzone and museum ambassador Pascal Zuberbühler, made a stop in front of the 1986 World Cup showcase and looked back on the legendary duel with Diego Maradona. A duel that Maradona won in 1986, but left him impressed enough that he wanted to bring Matthäus to SSC Naples. A great honour, as Matthäus recounted, but at the same time it was out of the question for him. It was clear that he would always in Maradona shadow, "and I didn't want to be a water carrier for Maradona". So the move to Naples never happened. Instead, Matthäus moved to Inter Milan in 1988 and spent four successful years in what was then the strongest league in the world: "That was simply the next logical step for me at the time.

World Cup in his “living room”
During his time in Milan, Matthäus also achieved the greatest triumph in his career as a player. As captain, he led the German national team to the title at the 1990 World Cup in Italy. A success that Matthäus remembers with particular fondness. Partly because a large part of it took place in his self-proclaimed "living room". Five of the German team's seven matches in the World Cup were played in Milan's Guiseppe Meazza Stadium, the home of Matthäus' then club, Inter Milan. Not only did he know every piece of the pitch by heart, but so did Andreas Brehme and Jürgen Klinsmann, his teammates at Inter back then. Together, the trio would go on to score ten of the Germans' total of 15 goals in the entire tournament.

"Germany one of the favourites to win the title in Qatar"
The evening of memories ended with a look into the future in the Q&A session with the audience. Asked what he expected from the German team at this year's World Cup, Matthaeus answered straight away: "The title, of course." With a smile, Matthäus added that Germany was not his top favourite, because France had earned this status. But with Hansi Flick, the German team has the ideal coach. Because he is professionally and personally outstanding. And Matthäus said that with the utmost conviction.